Exploring popular images and representations of psychotherapy:
how professionally are therapists’ stances depicted?

Nowadays, the growing impact of mass media, cinema and the internet has undoubtedly influenced public attitudes regarding the prevalence of mental illness and mental health professionals. In fact, research suggests that an individual’s conceptualization of psychotherapy and its use is basically formulated through stereotypic portrayals of psychologists in TV programs, films or books (Jorm, 2000). As far as psychotherapy is concerned, there is a tendency in recent films- Hollywood’s movies in particular- to depict psychotherapists and other mental health professionals as unethical boundary violators. Since terms such as psychologist or psychiatrist are not clearly distinct, many viewers or readers may feel confused trying to understand the differences among professions.

There are many stereotypes and biases concerning the profession of the psychotherapist as depicted in films and books. Sometimes a therapist may be portrayed as an eccentric, peculiar or even funny person as in Lethal Weapon 3 (1992). In other cases, a therapist may be presented as a cognitively impaired person, as in Raising Cain (1993), not to mention the case where we see the therapist as an insane murderer (Buried Alive, 1990). On the other hand, we should not overlook the fact that there are films where the therapist is depicted as a real professional with a proper therapeutic stance. In Citizen X (1995), for instance, a forensic psychiatrist provides a very accurate psychological profile of a murderer and, later, helps the police by interviewing the killer in a very effective way.

Perhaps the most common movie stereotype is of course the one where the therapist falls in love with the client or vice versa and, thus, the therapeutic process is suddenly terminated. Although sexual countertransference is strictly forbidden by the Ethics Code, films often encourage audiences to sympathize with the “lovers” by promoting the idea that this unethical stance is permissible as long as it benefits the client. In Stay (2005), the therapist (Foster), once having saved his suicidal client (Lila), is now in a relationship with her.

Another stereotype regarding the violation of boundaries is that of the therapists who use eccentric or even unreasonable practices in order to “cure” their clients. In Anger Management (2003), Jack Nicholson seems more like an unstable person- not to mention psychotic- rather than a professional therapist. He decides to move to his client’s apartment, he goes out with his girlfriend; he even climbs into bed with his client. It is clear enough that the ethical boundaries have been violated in many different ways but in the end we see that the whole act was for the shake of the client. This is one of the most prevalent stereotypes; an inappropriate therapeutic stance finally results in a positive client outcome. 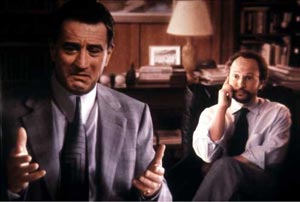 Another common stereotype is the one where poor limits are set from the beginning of the therapeutic process. The myth of “the wounded healer” (Schultz, 2005) suggests that a therapist has so many unsolved issues in his/ her life that finally realizes that he/ she is as distressed as the patient. One great example of this myth can be seen in Good Will Hunting (1997). Robin Williams, a highly effective therapist who connects well with his difficult patient, crosses the boundaries by grabbing his client roughly by the throat, after he disrespects his wife during a therapy session. Furthermore, the therapist breaks confidentiality when discussing about his client with his math professor. Partly the same case, in Analyze This (1999) the psychiatrist's son eavesdrops on sessions and spreads the gossip at cocktail parties. Such cases of therapists who set vague limits often blur the boundaries of acceptable and unacceptable behavior within the therapeutic relationship.

Although we cannot accuse the film or book industry for many incidences of boundary violations between psychotherapists and their clients, it is quite plausible that such depictions serve to maintain popular beliefs regarding the inappropriate client–therapist relationships. Although movies and books are under no obligation to follow reality, themes that potentially disrupt the public’s confidence in psychotherapy are very common. Nevertheless, our real concern should be to seek the reasons why movies and novels continue to depict psychotherapists in such a distorted way.

First of all, we should underline the fact that these portrayals may be partly based on real events. It is true that there are many therapists who violate ethical boundaries. The degree of distortion, of course, can be very extravagant in a movie, but the point still remains the same. Another thing we should take into consideration is the commercial factor; film industries tend to create stories that have impact on the audience. Apparently, stories about crazy or mentally unstable therapists, or stories about love/ sexual affairs seem to appeal more in the audience than the real nature of the therapist- patient relationship.

Finally, this tendency in the film industry may symbolically indicate something deeper; it may depict the fear or concern of the general population that psychotherapists actually have “the power to control mind”. Psychoanalytically, these archetype fears may correspond to different kinds of feelings that people have when they go for treatment: the wish for healing and rescue, the fear of incompetence, and the fear of pain, madness, and death (Schultz, 1998). Some great examples of these fears are films such as One Flew over the Cuckoo's Nest (1975) or Silence of the Lambs (1991).

In conclusion, it is clear enough that the image of the mental health professions in movies depicts, most of the times, a therapist incompetent who crosses ethical boundaries and principles regardless the benefit of the client. Although cinema and television tend not to depict the precise role of a therapist, the whole therapeutic stance may be amplified. Collaboration between mental health professionals and film industry will surely allow professionals to guide clients toward accurate information on how and when to access mental health care.